Give me Miu Miu

A little something I wrote for a Vogue competition.. 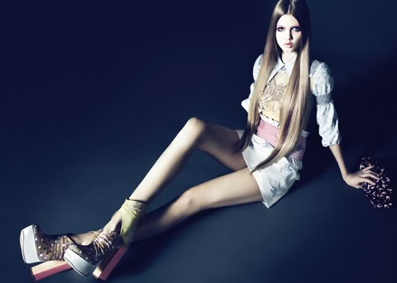 Nowadays we live in a “black is back,” kind of world. When it comes to fashion, it is accepted, expected even, that progression be achieved through reinvention of past trends. Nautical, Military and Cowgirl “looks,” have become cyclical catwalk occurrences. They are safe bets. Black will always works because it is slimming, nautical stripes are flattering, cowgirls are sexy and fashion on a commercial level is ultimately about looking great and feeling good.

At the other end of the fashion spectrum we have those occasions whereby design is directed at mould breaking, trendsetting & forward thinking. Although such feats still exist within the sphere of modern fashion, they are usually achieved to the detriment of commercial viability. Whereas in the 1960s widening the base of a trouser leg was a move sufficient to catalyze a new trend, today ingenuity bears the burden of a lengthy history that is only getting longer. Take Hussein Chalayan for example, a pioneer on the contemporary fashion scene with his dual-purpose furniture clothing. A dress that turns into a table. Clever? Undoubtedly. But practical? I think not. Desirable? Again, inspiring on a catwalk but not something that one could wear on an average day in the office, although it could potentially come in handy should the modern working woman find herself at a loss for a convenient place to set up her lap top and rest her soya milk late.

And so we are left in the midst of a creative conundrum; have we reached a point whereby we have exhausted all of the commercially viable routes to inventing new trends? Have we reached our creative capacity? As social psyche becomes more attuned with the need for recycling, is fashion to be subjected to the same fate of logic?

Thankfully Miu Miu’s Spring Summer 2010 collection has come along and dissolved my disillusionment. From top-to-toe it stands explicitly as testament to the fact that 21st Century fashion can be both pioneering and wearable. Miu Miu have created a highly desirable new look that sits viably with their repertoire and have done so by building a collection upon new shapes and silhouettes, experimental fabric combinations, and quirky prints. Chunky satin platform heels and ankle boots are worn with ankle grazing suit trousers, sleeveless shirts and cropped bolero jackets, speckled with puppies, daisies, kittens, swallows or female reclining nudes. There are high wasted schoolgirl skirts, cropped tops and short dolly dresses with puff sleeves and ruffles. Bra bandeaus are worn over shirts and dresses made from nude mesh and embroidered with patterns of twinkling crystals and sequins. Structure is instilled through use of block colouring and a diverse palette that ranges from sexy midnight blues and blacks , to seductive nudes, to childlike pastel blues, yellows and pinks, to glaring greens, blood reds and rusts.

What may appear on paper as a bonafide recipe for fashion calamity achieves an effect that is quite the opposite. The aesthetic is one of multi layers and beautiful contradictions. Whereas Victorian primness is suggested in the adoption of high necklines and ruffled sleeves, dresses reveal sexy slices of flesh in surprising places. Fabric prints and the nonchalant sweeping side plaits worn by models are suggestive of girly innocence whilst sharp tailoring alludes to sophistication as well as androgyny. In this collection Miu Miu present us with an abundance of new ideas but also force us to reevaluate old institutions such as the work shirt and the roles of under and outer wear. Their look is inventive, desirable and most importantly wearable. The aesthetic may be mixed up but the message is perfectly clear. This is progressive clothing for the adventurous Twenty-first century woman.