In anticipation of Thom York’s  new band “Atoms for Peace’s,” first tour, I have decided to take a look at the ways in which the this itty bitty nuclear particle has influenced the output of other admired creatives. This is a only a taster of what I have found… 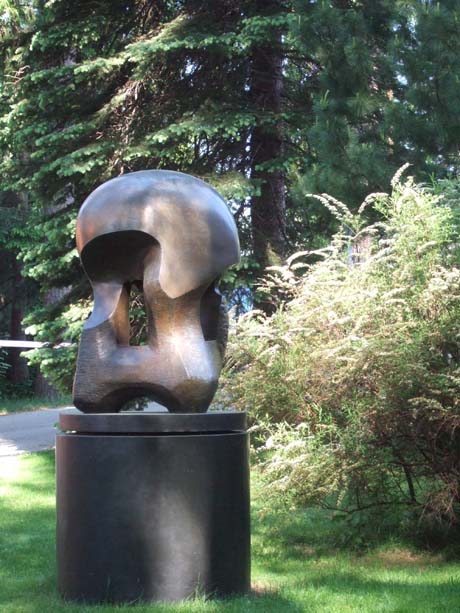 A bronze sculpture by Henry Moore that featured in his recent exhibition at The Tate Britain. Its permeant home is the University of Chicago and the spot where the world’s first nuclear reactor was made. In 1934 Enrico Fermi, the Italian nuclear physicist carried out the first successful controlled nuclear fission in a shed on Chicago University campus in complete secret. This was an event of extreme historical significance as it meant that for the first time Man was able to control this huge force for peaceful purposes. In 1964 The talents of Moore were enlisted to commemorate the success of Fermi’s experiment. The sculpture bears heavy connotation; its shape alluding to both the human skull and the atomic mushroom cloud, thus an apt reflection of the morbid and scientific potential of the atom.  Moore’s choice of “Atom piece,” as the title of the sculpture is a devious play on words that reveals the artists own stance as a nuclear disarmament activist. Resultantly viewers are encouraged to assume the same approach to consideration of the theme. 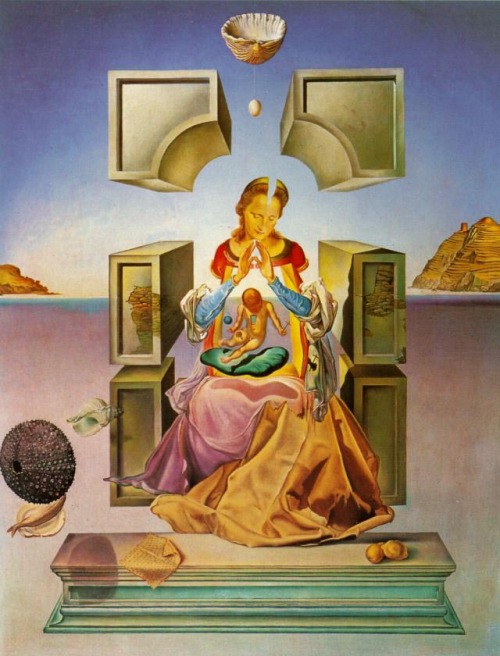 The Madonna of Port Lligat 1949

Until the the atomic age, Salvaodr Dali, one of the greatest Spanish artists of all time, was consumed with his pursuit of the surreal. However the global fear and uncertainty that the atomic bombings of Hiroshima and Nagasaki instigated, catalyzed drastic thematic change within Dali’s artistic output. He recognized that the nuclear age had irrevocably changed humanity’s perception of natural existence. Instead of focusing on the internalized realm of human psyche, he began to look at the human psyche in connection with the outside world; its realities, religions and sciences. Dali developed a profound interest in the ideas of Werner Heisenberg and his Uncertainty Principle of Quantum theory. From this was born a new artistic manifesto; the “Anti-Matter Manifesto,” and in turn a new artistic movement that Dali called Nuclear Mysticism. His paintings became hyper-real and increasingly elemental, often featuring material objects in the process of particular decomposition. Religious imagery and iconography became a heavy feature as Dali expressed his own renewed interest in religion and the divine, as well as his believe in the benefits of regarding quantum physics with a metaphysical eye. Such is evidence of Dali’s position as a visionary as well as an artist.

Stanley Kubrick’s Dr Strangelove or: how I learned to Stop Worrying and Love the Bomb 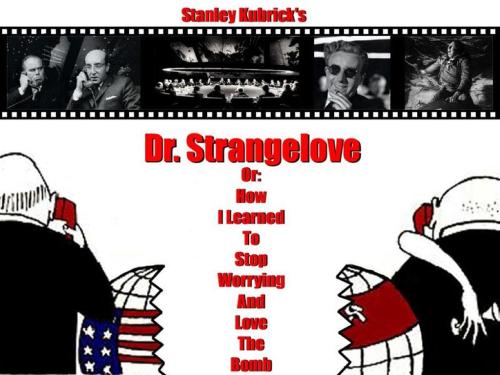 Dr Strangelove is a perfect spoof of the military and political mayhem that provoked the birth of the atomic age. The movie tells the tale of General Jack D. Ripper, a maniacal U.S military leader who goes behind the President’s back to mount a campaign that will eradicate communism by sending a squadron of B-52 bombers to blitz the soviet union. Total farce ensues as the President, played by Peter Seller’s, and his war council unveil and try to rectify the insane actions of one of their much trusted generals. During the movie as well as the part of the President,  Sellars masterfully plays the part of a highly strung British army captain and Dr. Strangelove the mental bomb maker. Shot in monochromatic colours, the movie is a stark and completely hilarious insight into the insanity of the threat of nuclear holocaust. If you haven’t seen it yet, you are missing out on one of the greatest satirical comedy’s of all time.

A metaphor for the fireball surrounding an atomic bomb. This song is bittersweet…

Ill end on something I love by Gregory Corso. For anyone who doesnt know, Corso was a key player in the Beat scene, (meaning he was driven by a philosophy that slammed the  lethargic  and decadent attitude of mass consciousness during this era.) Its pretty long but worth reading. Enough said. Ill let the poetry do the talking.