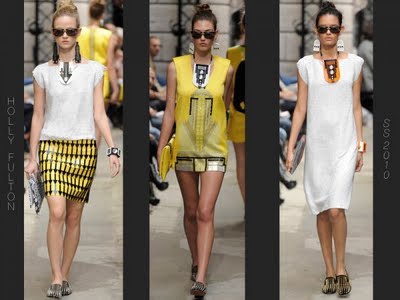 First came  Christopher Kane, then came Jonathan Saunders. Now the latest Hot Scott craftily making her way towards fashion domination is my new No.1, ex Lanvin accessories designer Holly Fulton. Whether a diehard fan such as myself or not, it is inarguable that her vibe is unmistakably modern, unique &  fashion forward. Paradoxically this final aesthetic is achieved through explicit tribute to art deco architerture of the 1930s, both in structure of her clothing and fabric pattern design. Although Scottish born and London based, for her Spring/ Summer 2010 collection, Fulton turns to New York City as her source of inspiration, looking closey at a guide book written specifically for the opening of The Empire State Building and the Pop Art of Scottish artist Sir Eduardo Paolozzi, in particular his screenprint of 1964, “Wittgenstein in New York.”

With her collection Fulton transcends Paolozzi’s two dimensional canvas and applies similar geometric design, reflective of the architectural embellishments of skyscrapers such as The Empire State Building and The Rockerfeller Centre, to her three dimensional and highly covetable fashion creations. Meticulously drawn, swirling prints and graphic patterns emblazon silk, light wool and leather mini dresses, knee length skirts and shirts. The various items that make up her collection; simple in shape, bold in design, follow a Paolozzi-esque palette of basic monochromes accented by orange, yellow, blue and green to give them a visual reminiscent of the stylized aesthetic of pop art  and a futuristic edge. These are accompanied by bib sized statement necklaces, dangling earings and giant clutches accented with crystal and metal detail.

The clever entwinement of architectural tribute with art historical appreciation with progressive thought, renders Fulton one of the most exciting designers around. Although the final aesthetic achieved is neither blatantly feminine nor obviously sexy, there is something intrinsically alluring about a look that addresses these things so satisfyingly with the simplicity of symmetry. 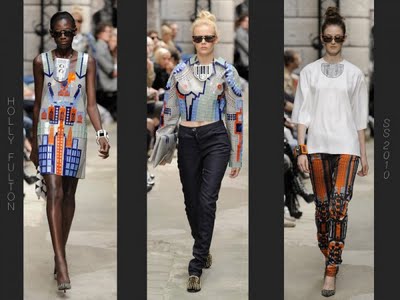